The emergence and evolution of social entrepreneurship has remained a contested concept and researchers have generated differing opinion on this (Austin et al., 2006; El Ebrashi, 2013; Short et al., 2009b). The evidence does not suggest a unique evolutionary path, rather a conundrum dictated by multi-dimensionality. Studies show that the term social entrepreneur was first mentioned by Joseph Banks in his seminal work, The Sociology of Social Movements, which was published in 1972. Though not directly related to entrepreneurship, Banks used the term social entrepreneur to illustrate managerial skills which he referred to as a solution to different social problems. Two European author Borzaga and Defourny in their book titled The emergence of Social Enterprise claimed that the social entrepreneurship concept started with the social economy concept in France in 1970 in the form of cooperative associations of mutual assistance. Other scholars have argued suggesting that the origins of social entrepreneurship dated back to the 1980s, after Bill Drayton founded Ashoka, a grant-making organisation that supported innovators and their pattern-breaking solutions to social problems in the US.

The following figure illustrates the historical evolution of the social entrepreneurship domain during the past four decades: 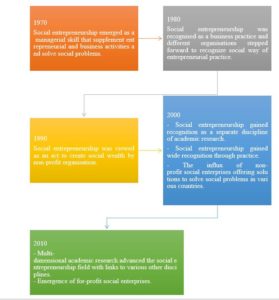